Last October 10th, the Oro Integrated Cooperative (OIC) kicks-off and gearing up for their upcoming 50th year of quality service to people. I am a witness of this quality service since I am also a member of OIC for nearly two years now. I will share that experience on my succeeding post, for now let me share to you this. 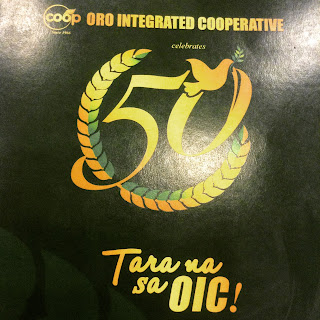 The said kick-off was attended by OIC bosses, partners, employees and us, some members of OIC and of the media, in Malberry Suites. The ceremonies was short, simple yet full packed: Inspirational messages from OIC President; launching of the 50th year Logo and; the four advocacies of the company.

OIC now has 120,000 members and still growing. They are from Cagayan de Oro, Bukidnon, Misamis Oriental and Bohol. What made me interested to became a member of OIC is that they are the only one who have an Automated Teller Machine (ATM) under Megalink.

Its all started last March 5, 1966 when Atty. Mordino Cua founded Oro Cooperative Credit Union  (OCCU) with a modest start up capital of 88 pesos then the 27 members followed and believed Atty. Cua's promotion on Financial Self-sufficiency and Economic Independence. Fast forward to 1991, OCCU became Oro Integrated Cooperative as we all know it today.

As the members grow, so thus its financial growth. For 50 years, OIC built an asset base of 2.1 billion Pesos. Posting a net surplus of 136 million pesos last 2014 which entitled every eligible member a 10.75% dividend rate.

So, tara na sa OIC! Financial Success is here. I should know, Im one of its members who benefited to their financial services. Ill share to you on the next article how, but to tease you, let me say that I traveled every year all because of OIC. My savings account in commercial banks only earns two centavos but here in OIC I earned more that five pesos a year in interest tax free.
Posted by agent112778 at 10/27/2015 05:44:00 PM
Oro Integrated Cooperative Kicks-off their 50th Year
2015-10-27T17:44:00+08:00
agent112778
CdeOdotPH|Kick Off Ceremonies|OIC|Oro Integrated Cooperative|
Comments
Email ThisBlogThis!Share to TwitterShare to FacebookShare to Pinterest
Labels: CdeOdotPH, Kick Off Ceremonies, OIC, Oro Integrated Cooperative

Last May 2015, we seen a lot of 7-Eleven stores sprouting and opening here in Cagayan de Oro City. To date, there are about six (6) stores - the latest was in Velez-Recto (aka Likoan-Kapitolyo). By the year's end, there will be four more to a total of ten. Cagayan de Oro is the second city in Mindanao that 7-Eleven expanded to. Davao City was the first last April 2015. 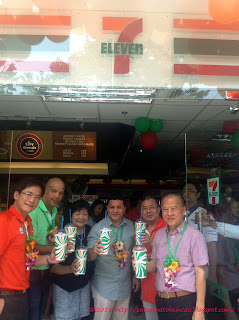 Before the event, I talked to a 7-Eleven executive and he said that he is amazed that the slurpee here in CdeO is twice or even more bigger sales than of Metro Manila. I then said to him that its because of two things: one is that there is a university nearby and the students loved it and; second is that it is hot like summer here. He is more amazed on the first than of the second, so I pointed to him the direction of MUST.

As a Manileyo transfered here in CdeO, I can clearly say that I grew up with 7-Eleven. The love affair started in 1995 as a college freshman who always takes out "big uhaw' sized Gulp or large slurpee with premium bola-bola siopao ir big bite spicy Hungarian sausage. Now that they have "city blends" why should i (still) go to an expensive coffeshop, which are both "from beans to cup" coffee.

Lastly, what makes me more in loved with 7-Eleven is that their new slogan "serving everyday heroes nationwide". You see, we the customers are always considered "heroes". I just then realized that no matter what profession or occupation we do, we are a hero to one another. That is why Im thankful to 7-Eleven for calling us hereoes and for coming here in Cagayan de Oro. Home sickness cured by the premium bola, city blends, gulp, big bites and slurpee.

Monster Kitchen Academy is proud to announce that they now have a new batch of chefs. Four (4) batches in Fundamentals of Baking and Pastry Arts (FBPA) and two (2) batches in Fundamentals of Culinary Arts (FCA) with total graduates of 45 chefs, the biggest number of graduates so far. Some the graduates also took part in Kumbira 2015 who won in student category for the desserts, cakes and bread making. Also, (one) student took part in the Philippine Culinary Cup. 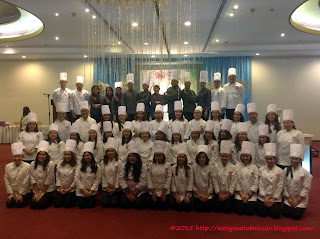 Chef Carsten Radke is the keynote speaker. For those you don’t know, Chef Carlson is the owner of the former La Vietta Wine Bar and Restaurant. He shared in his keynote speech that he was like the graduates about 30 years ago and step up into the challenges that molded him for what he is to today. 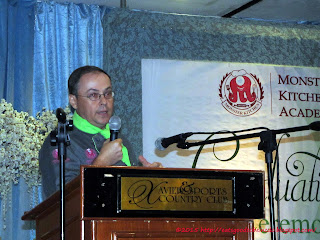 To the graduates, faculty chefs and admin staff, congratulations once more to your success. Thank you Monster Kitchen Academy for producing not only chefs but monsterepreneurs who gave and will give us quality meals and desserts.

2) With a sad heart, please accept my apologies for being late in my articles, things got out of hand lately.