A Quick Chat with Ms.Global 2014 2nd Runner Up Catherine Almirante

Ms. Catherine Marie Almirante was our representative for Miss Global 2014 which was held in Mexico last December 2014 and brought home the 2nd runner up crown. She went back home in Cagayan de Oro City for a victory homecoming, a courtesy call to the City Mayor, did some photo shoots and endorsements, and of course some tours for rest and recreation.
Before she goes back to Manila for her studies, I had the chance to met her in Lifestyle District for a quick interview and photo opp. This opportunity was possible with the help of a Facebook friend - and I call him CDO's resident Missosologist - Mr. Jan Paasa.
Since this is a quick chat - while waiting for her ride to the airport - here are some of the things we talked about. 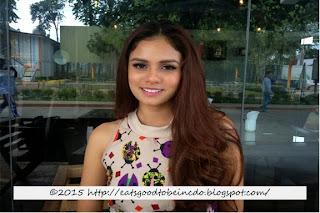 She is a Psychology student in Makati City. She paused for awhile in her studies to perform her duties as Miss Global Philippines 2014 and now as Miss Global 2014 2nd runner up.

She traveled alone for the pageant but she assured me that she is used to in traveling alone. She traveled by air, land and sea and she enjoyed it with any travel sickness.

She made friends with her co-contestants and until now she chats and talks to them.

She and her court are engaged in environmental protection, they even became the Department of Environment and Natural Resources' Ambassadress.

Commercial Modeling and endorsements for products and services.

Things that the public will look up to

We will see her more often during the summer and Kagay-an Higalaay Festival. It is also in the works and talks to make Cagayan de Oro host national pageants.
at March 17, 2015
Email ThisBlogThis!Share to TwitterShare to FacebookShare to Pinterest
Labels: Almirante, Interviews, Miss Global 2014