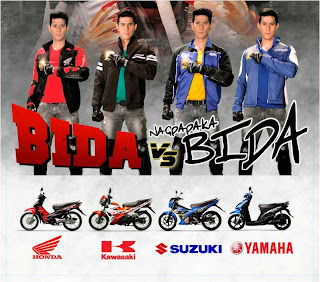 For three days, the Big 4 motorbike firms, shifting the holding of this noteworthy campaign from its traditional Manila base to this famous Mindanao city called “City of Golden Friendship,” will offer safety-riding programs and recreational activities amid a festival-like environment, to patrons as they reiterate the wise choice of original motorcycles and spare parts among motorists for a more pleasurable riding experience.

Yesterday, the event kicked-off with a grand Big 4 motorcade started at 8 a.m. then, a press conference, ribbon-cutting and unveiling of the OnB seal and video presentation will follow, while another interesting video called “Bida vs. Nagpapakabida” been shown to further emphasize the value of using original brands and spare parts. In the afternoon, seminars organized by the Big 4 will also be held, in between various games and raffle events. Plus the “Bidang Barangay” contest will kick off, pitting 4 groups against each other to earn the right to be called “Bidang Barangay.”

For the second day, people from Cagayan de Oro City and the rest of Mindanao will get to know more about the “Original na Bida” campaign through interviews with the Big 4 representatives. More raffle draws, exciting games, plus electrifying performances from guest artists also marks Day 2 of the event.

Finally, Day 3 will feature, aside from more raffles, games and musical entertainment, the finals of the Bidang Barangay contest and a scintillating “fliptop” (rap battle) that will feature YouTube Pinoy rap sensation “Abra” and his partners, Loonie and Band. They will engage in a literary battle using rap as their medium. Expect the crowd to get pumped up as they deliver a one-of-a-kind performance rarely seen nowadays.

The same companies are also known to observe strict compliance with government regulations and standards. That’s why customers are assured of riding high-quality motorcycles in the country.

With the success of the safety and quality campaign, the “Original na Bida” drive has gained support from thousands of motorcycle enthusiasts in various media platforms and other concerned groups for the past 2 years for its noteworthiness and timeliness. Many agree that it is really an advantage to own original motorcycle units as they cited its inherent durability and reliability.